Public health and the TRIPs

Developing and least developed countries were supposed to have the benefit of a moratorium on implementing pharmaceutical patents until the years 2005 and 2016 respectively. But these concessions have been […]

Agreement on Agriculture in TRIPs

The Agreement on Agriculture (AoA) is an international treaty of the World Trade Organization. It was negotiated during the Uruguay Round of the General Agreement on Tariffs and Trade, and […]

The WTO is the product of an international agreement, and that agreement and the agreements annexed to it constitute the basic source of WTO law. The reports of panels and […] 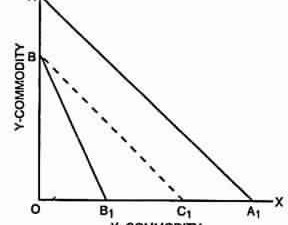 The Modern Theory of international trade has been advocated by Bertil Ohlin. Ohlin has drawn his ideas from Heckscher’s General Equilibrium Analysis. Hence it is also known as Heckscher Ohlin […]

The World Trade Organisation (WTO) has taken concrete shape in 1995 after successful operation of the General Agreements in Tariffs and Trade (GAIT) for around five decades. GATT again, had […]

New trade theory (NTT) suggests that a critical factor in determining international patterns of trade are the very substantial economies of scale and network effects that can occur in key industries. These […]

General Agreement on Tariffs and Trade (GATT) was a legal agreement between many countries, whose overall purpose was to promote international trade by reducing or eliminating trade barriers such as […]

Decision Making in the WTO

Beetham acknowledges that democratic institutions to a large extent exemplify democratic principles that require practical institutional form for their realisation. In order to determine whether the WTO is a democratic […] 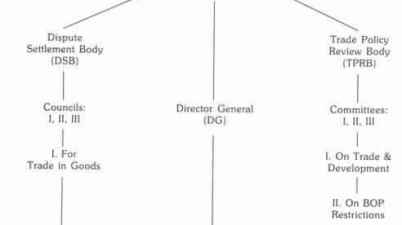 Marrakesh Agreement, Origin of WTO, Mandate of WTO, Membership of WTO, Institutional structure of the WTO

The Marrakesh Agreement, manifested by the Marrakesh Declaration, was an agreement signed in Marrakesh, Morocco, by 123 nations on 15 April 1994, marking the culmination of the 8-year-long Uruguay Round […]

The Uruguay Round (1986-94) saw a shift in North-South politics in the GATT-WTO system. Previously, developed and developing countries had tended to be in opposite groups, although even then there […]

The WTO Secretariat is located in Geneva. It has around 450 staff and is headed by its Director-General, Mr. Renato Ruggiero, and four deputy directors-general. Its responsibilities include the servicing […]

Agreements and National Policy Since the various agreements that constitute the WTO cover such a wide range of topics, dispute settlement panelists find that a number of subjects come under […]

An Overloaded System Over the past two decades, the WTO dispute settlement system, including the Appellate Body, has been remarkably active. Since its inception, 551 disputes have been initiated by […]