Digital computer As the advancement in technology, every technology is digitizing because it provides more accuracy. Unlike an analog computer, the digital computer works with discrete signals, rather than the […]

Computers in the form of personal desktop computers, laptops and tablets have become such an important part of everyday living that it can be difficult to remember a time when […] 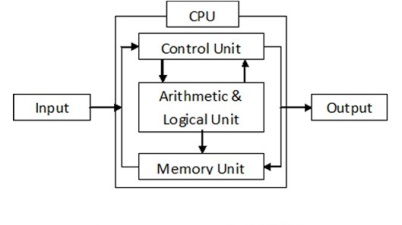 Major Components of a Digital Computer

The digital computer is a digital system that performs various computational tasks. The word digital implies that the information in the computer is represented by variables that take a limited […]

Hardware (H/W), in the context of technology, refers to the physical elements that make up a computer or electronic system and everything else involved that is physically tangible. This includes […]

Software is a collection of instructions that enable the user to interact with a computer, its hardware, or perform tasks. Without software, most computers would be useless. For example, without […]

FIRMWARE Firmware is a software program permanently etched into a hardware device such as a keyboards, hard drive, BIOS, or video cards. It is programmed to give permanent instructions to […]

Computer Application is the end-user programs designed to enhance the productivity in various fields of work. The applications are used for creating documents, spreadsheets, databases, and publications, doing online research, […]

Main Memory The main memory in a computer is called Random Access Memory. It is also known as RAM. This is the part of the computer that stores operating system […]

An operating system is a software which acts as an interface between the end user and computer hardware. Every computer must have at least one OS to run other programs. […]

In an operating system software performs each of the function: (i) Process Management: Process management helps OS to create and delete processes. It also provides mechanisms for synchronization and communication among […]

A file management system is a type of software that manages data files in a computer system. It has limited capabilities and is designed to manage individual or group files, […]

Uses of Computer in Office Work No matter what type of business you’re in, chances are you use a computer for a large part of it. Some of the many […]

Use of Computers in Book Publication

Not long ago, reading a book on your telephone was science fiction. Computers have transformed the making, promotion and reading of books and magazines. Publishers use computers to design and […]