Movement along vs. Shift in Demand Curve

Every firm faces a certain demand curve for the goods it supplies. There are many factors that affect the demand and these effects can be seen by observing the changes in the demand curve. Broadly speaking, the factors can be categorized into two types:

(i) Change in demand

(ii) Change in the quantity demanded

Movement of the Demand Curve

The important aspect to remember is that other factors like the consumer’s income and tastes along with the prices of other goods, etc. remain constant and only the price of the commodity changes.

In such a scenario, the change in price affects the quantity demanded but the demand follows the same curve as before the price changes. This is Movement of the Demand Curve. The movement can occur either in an upward or downward direction along the demand curve. 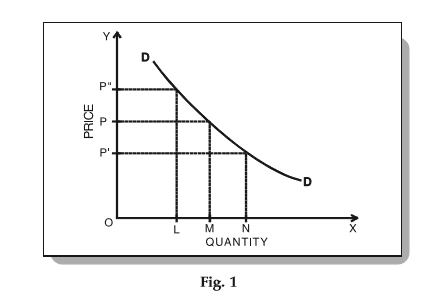 In Fig. 1 above, we can see that when the price of a commodity is OP, its demand is OM (provided other factors are constant). Now, let’s look at the effect of an increase and decrease in price on the demand:

Therefore, we can see that a change in price, with other factors remaining constant moves the demand curve either up or down.

The shift of the Demand Curve

When there is a change in the quantity demanded of a particular commodity, at each possible price, due to a change in one or more other factors, the demand curve shifts. The important aspect to remember is that other factors like the consumer’s income and tastes along with the prices of other goods, etc., which were expected to remain constant, changed.

In such a scenario, the change in price, along with a change in one/more other factors, affects the quantity demanded. Therefore, the demand follows a different curve for every price change.

This is the Shift of the Demand Curve. The demand curve can shift either to the left or the right, depending on the factors affecting it.