The productive resources of the community can be used for the production of various alternative goods.

But since they are scarce, a choice has to be made between the alternative goods that can be produced. In other words, the economy has to choose which goods to produce and in what quantities. If it is decided to produce more of certain goods, the production of certain other goods has to be curtailed.

Let us suppose that the economy can produce two commodities, cotton and wheat. We suppose that the productive resources are being fully utilized and there is no change in technology. The following table gives the various production possibilities.

This means that, in a full-employment economy, more and more of one good can be obtained only by reducing the production of another good. This is due to the basic fact that the economy’s resources are limited.

The following diagram (21.2) illustrates the production possibilities set out in the above table. 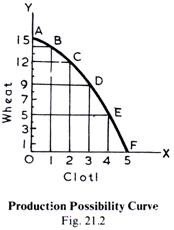 It is to be remembered that all the points representing the various reduction possibilities must lie on the production possibility curve AF and not inside or outside of it. For example, the combined output of the two goods can neither be at U nor H. (See Fig. 21.3) This is so because at U the economy will be under-employing its resources and H is beyond the resources available. 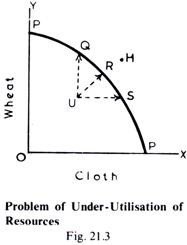