Development and implementation of the MIS

a) Development and Implementation of the MIS

Once the plan of MIS is made, the development of the MIS calls for determining the strategy of development is discussed earlier, the plan consists of various systems and subsystems. The development strategy determines where to begin and in what sequence the development can take place with the sole objective of assuring the information support. The choice of the system or the subsystem depends on its position in the total MIS plan, the size of the system, the user’s understanding of the systems and the complexity and its interface with other systems. The designer first develops systems independently and starts integrating them with other systems, enlarging the system scope and meeting the varying information needs. Determining the position of the system in the MIS is easy. The real problem is the degree of structure and formalization in the system and procedures which determine the timing and duration of development of the system. Higher the degree of structured and formalization, greater is the stabilization of the rules, the procedures, decision-making and the understanding of the overall business activity. Here, it is observed that the user’s and the designer’s interaction is smooth, and their needs are clearly understood and respected mutually. The development becomes a method of approach with certainty in the input process and outputs.

When the system is complex, the development strategy is Prototyping of the System. Prototyping is a process of progressively ascertaining the information needs, developing a methodology, trying it out on a smaller scale with respect to the data and the complexity, ensuring that it satisfies the needs of the users, and assess the problems of development and implementation.

In the prototyping approach, the designer’s task becomes difficult, when there are multiple users of the same system and the inputs they use are used by some other users as well. For example, a lot of input data comes from the purchasing department, which is used in accounts and inventory management.

The attitudes of various users and their role as the originators of the data need to be developed with a high degree of positivism. It requires, of all personnel, to appreciate that the information is a corporate resource, and all have to contribute as per the designated role by the designer to fulfill the corporate information needs. When it comes to information the functional, the departmental, the personal boundaries do not exist. This call upon each individual to comply with the design needs and provide without fail the necessary data inputs whenever required as per the specification discussed and finalized by the designer.

Bringing the multiple users on the same platform and changing their attitudes toward information, as a corporate resource, is the managerial task of the system designer. The qualification, experience, knowledge, of the state of art, and an understanding of the corporate business, helps considerably, in overcoming the problem of changing the attitudes of the multiple users and the originators of the data.

There are many systems or subsystems in the MIS which have a life cycle, that is, they have birth and death. Their emergence may be sudden or may be a part of the business need, and they are very much structured and rule-based. They have 100% clarity of inputs and their sources, a definite set of outputs in terms of the contents and formats. These details more or less remain static from the day the system emerges and remains in that static mode for a long time. Minor modifications or changes do occur but they are not significant in terms of handling either by the designer or the user of the system. Such systems, therefore, have a life and they can be developed in a systematic manner and can be reviewed after a year or two, for significant modification, if any. 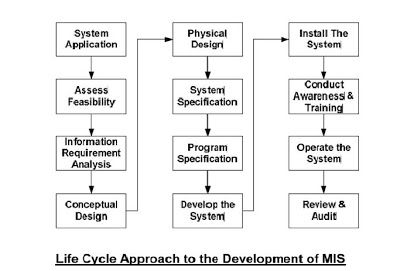 Examples of such systems are payroll, share accounting, basic financial accounting, finished goods accounting and dispatching, order processing, and so on. These systems have a fairly long duration of survival and they contribute in a big way as sources of data to the Corporate MIS. Therefore, their role is important and needs to be designed from the viewpoint as an interface to the Corporate MIS.

The implementation of the system is a management process. It brings about organizational change; It affects people and changes their work style. The process evokes a behavior response which could be either favorable or unfavorable depending upon the strategy of system implementation.

In the process of implementation, the system designer acts as a change agent or a catalyst. For a successful implementation, he has to handle the human factors carefully. The user of the system has a certain fear complex when a certain cultural work change is occurring. The first and the foremost fear are about the security to the person if the changeover from the old to new is not a smooth one. Care has to be taken to assure the user that such fears are baseless and the responsibility, therefore, rests with the designer. The second fear is about the role played by the person in the organization and how the change affects him. On many occasions, the new role may reduce his importance in the organization, the work design may make the new job impersonal, and a fear complex may get reinforced that the career prospects may be affected. There are certain guidelines for the systems designer for the successful implementation of the system. The system designer should not question beyond a limit the information need of the user.

The first step is unfreezing the organization to make the people more receptive and interested in the change.

The second step is choosing a course of action where the process begins and reaches the desired level of stability.

The third step is Refreezing, where the change is consolidated and equilibrium is reinforced. Many times, this process is implemented through an external change agent, such as a consultant playing the role of a catalyst.

The significant problem in this task is the resistance to change. The resistance can occur due to three reasons, viz., the factors internal to the users of information, the factors inherent in the design of the system and the factors arising out of the interaction between the system and its users. The problem of resistance can be handled through education, persuasion, and participation. This can be achieved by improving the human actors, and providing incentives to the users, and eliminating the organizational problems before implementing the system.